We would like to invite you to visit the Chapel-Shrine of the Holy Souls in the Manila Metropolitan Cathedral-Basilica, Intramuros, Manila, Philippines, where it is set to be the center of devotion and prayer for the dead this coming November. The Santo Entierro of the Cathedral was also placed in the said Chapel.

The Holy Souls Chapel is located at the right side facing the main altar of the Cathedral, fourth Chapel from the main door.

To know more about the said chapel, kindly appreciate the text below taken from the website of the Manila Cathedral (http://manilacathedral.ph/about/).

We hope that you can visit the Holy Souls Chapel as we celebrate the Season of Remembrance. 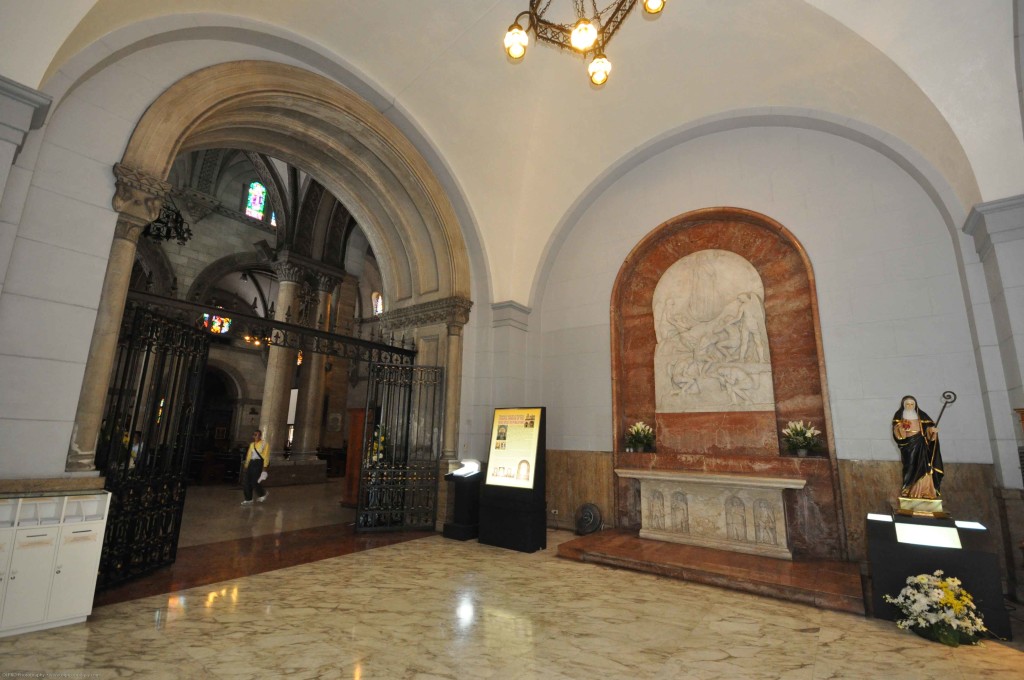 CHAPEL-SHRINE OF THE HOLY SOULS IN PURGATORY

The devotion to the Holy Souls in Purgatory has been a practice in the Manila Cathedral for centuries. This is evidenced by the inclusion of a Chapel dedicated to the Holy Souls among the several chapels incorporated in the rebuilding of the Manila Cathedral every now and then after being destroyed either by fire or earthquake or typhoon or bombings like what happened during the Battle of Liberation in World War II.

The earliest available record attests to the inclusion of a Chapel dedicated to the Holy Souls in the third structure of the Manila Cathedral, whose rebuilding was completed in December 1641. The Chapel which was called “Souls in Purgatory” was donated by a certain Capitan Antonio de Espinosa and his wife Maria de Riaga (Maria Acriaza in other books), a descendant of one of the oldest families in Manila.

No mention is made in the available records for the incorporation of a Chapel dedicated to the Holy Souls in the rebuilt structures of the Manila Cathedral starting from the fourth (1681-1751), then fifth (1760-1852), sixth (1858-1870) and seventh (1879-1945). However,there is a reference to a Chapel intended for Our Lady of Sorrows for the 5th and 7th structure of the Manila Cathedral. The Chapel planned for Our Lady of Sorrows, whether it materialized or not because it was included in another chapel, served as a designated place for observing the devotion to the Holy Souls in Purgatory.

The Chapel-Shrine has a marble altar piece by the Italian Giuseppe Perischetti. It has a unique marble relief that depicts the souls in Purgatory assisted by holy angels, raising their prayer to Mary, as refugium peccatorum (refuge of sinners). Moreover, it shows the saints whom Liturgy invokes in the commendatio animae (commendation of the soul): St. Michael the Archangel, St. John the Evangelist and Sts. Peter and Paul.